LANSING, Mich. – New public opinion polling commissioned by the Michigan Freedom Fund shows Governor Gretchen Whitmer facing severe public backlash over her leadership of the state and her decision not to warn Benton Harbor residents about dangerous lead in their drinking water, despite knowing about the dangerous water for more than two years. Polling also shows a vast majority of Michigan voters do not think Whitmer should be allowed to benefit from the nearly $4 million in excessive contributions over the limit her campaign has pocketed. 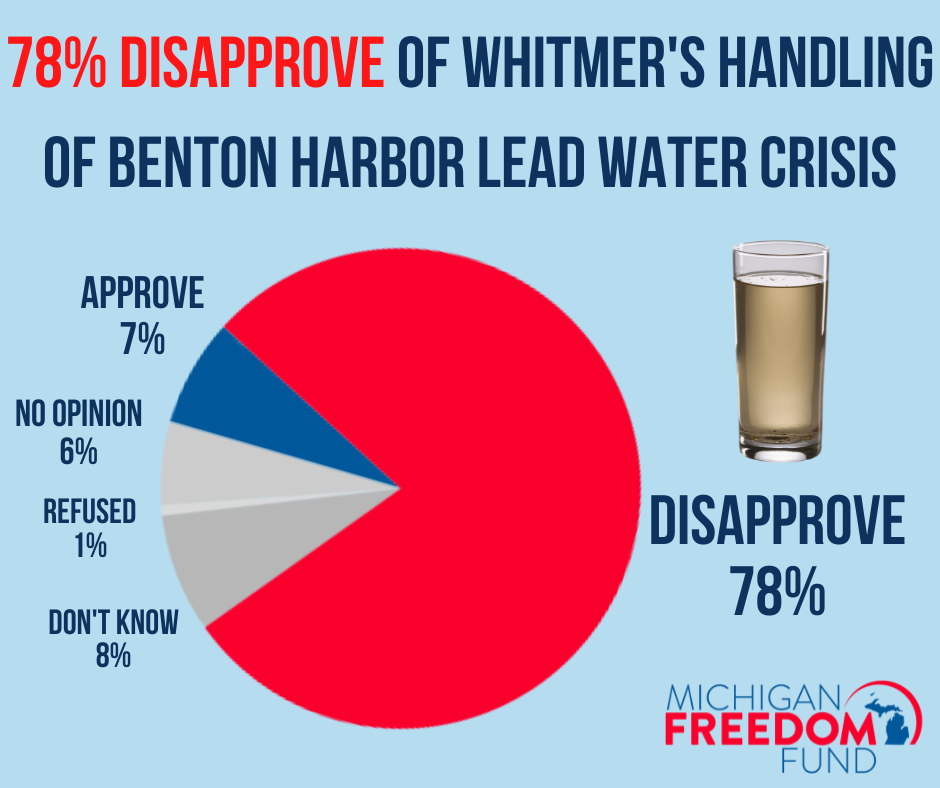 Local Benton Harbor residents, pastors, and safe water advocates have blasted the Governor for not warning them, not addressing the crisis, and not providing safe water and water filters. EGLE director Liesl Clark reluctantly told state lawmakers last week that the water is not safe to drink. Despite the admission, the Whitmer administration has failed even to properly staff recent bottled water giveaways, leaving residents of the majority-Black city in long lines for hours at a time before eventually being turned away.
Instead, Whitmer snuck out of the state, partying at a swanky Washington, D.C. hot-spot where she was photographed violating local COVID-19 masking orders.
“More than 78% of voters disapprove of Gretchen Whitmer’s handling of the Benton Harbor water crisis and why wouldn’t they – she just got caught partying in D.C. after leaving Benton Harbor residents with lead in their water and little access to bottled water while the pipes are replaced,” said Tori Sachs, executive director of the Michigan Freedom Fund. “Whitmer knew for more than two years that the water in Benton Harbor wasn’t safe to drink and didn’t do anything about it. Now, her administration is failing to adequately respond to the magnitude of the crisis in Benton Harbor.”
MRG’s poll found that 64.3% of voters strongly disapprove of Whitmer’s handling of the Benton Harbor poison-water crisis, while another 14.1% somewhat disapprove. Only 7.3% strongly or somewhat back her performance on the issue.

52% Say Michigan is on the Wrong Track 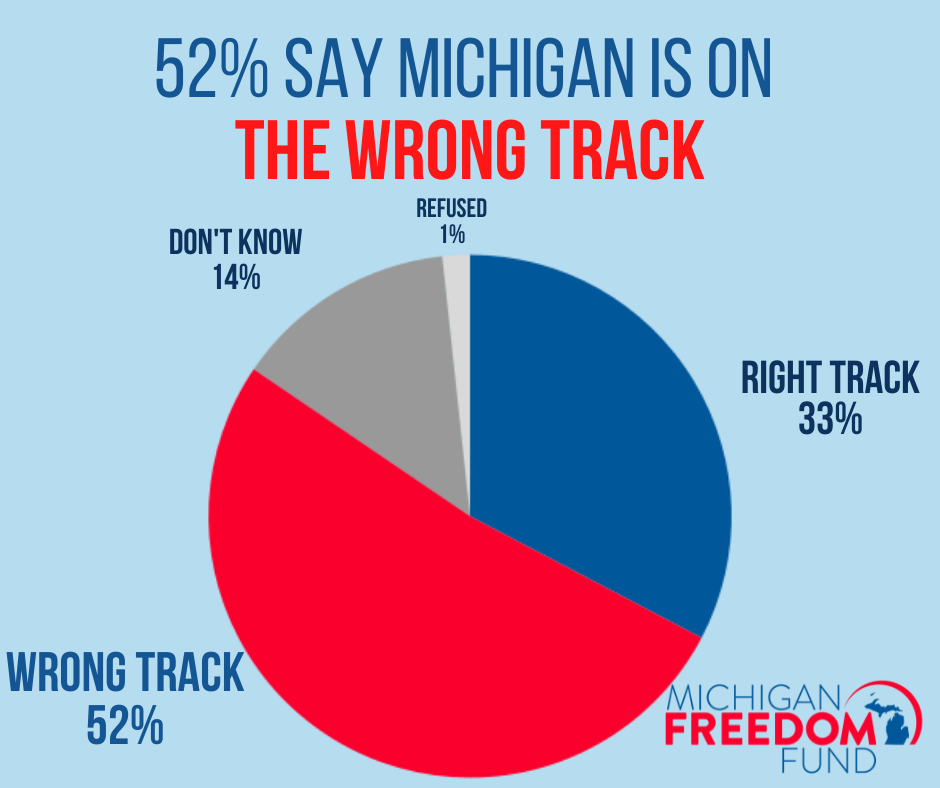 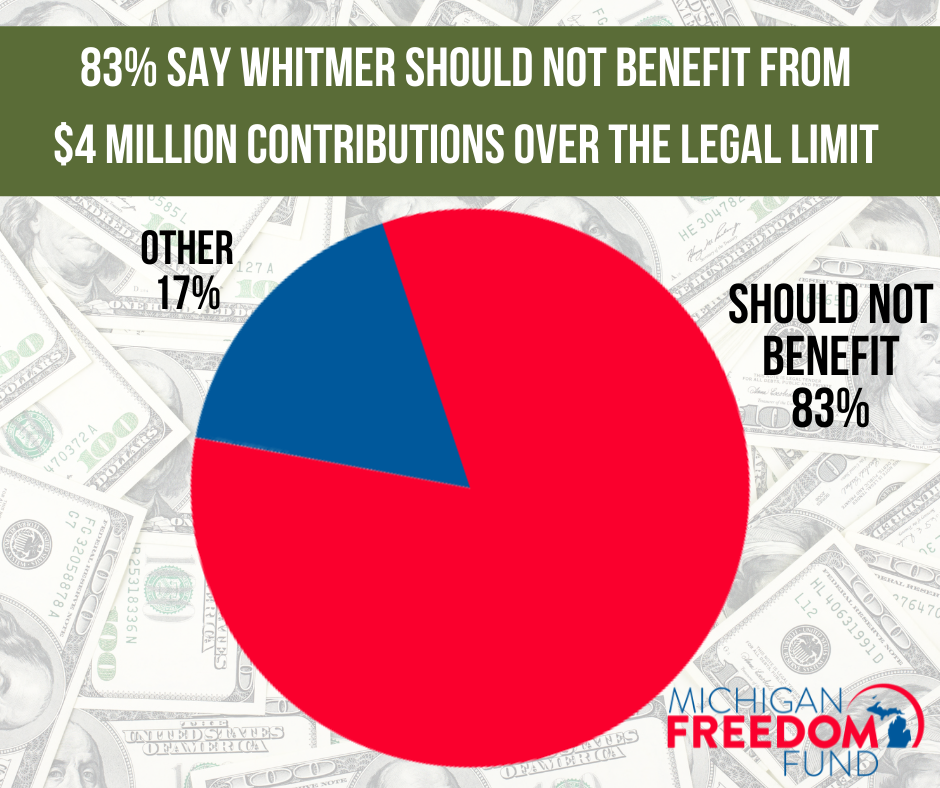 Following a court filing by the Secretary of State’s office declaring that Whitmer will need to return or donate millions of dollars in illegal campaign contributions, pollsters asked voters what the Governor should do with the illegal cash.
46.3% believe the money should be donated to charity. 36.7% said she should return the illegal money to the donors who gave it. Only 7% believe the Governor should be allowed to donate the illegal money to the Democratic Party or other political action committees to benefit her reelection chances.
“Gretchen Whitmer has repeatedly broken the law and raised millions in illegal campaign cash,” said Sachs. “Even her fellow Democrats, Secretary of State Benson and Attorney General Nessel, have gone on record suggesting she’ll be forced to return the illegal cash. 83 percent of voters want that illegal cash returned to the original donors or donated to charity – not laundered to other political committees that will run ads to help the Governor. Voters are smart, and they’re right.”
The Michigan Freedom Fund filed a formal campaign finance complaint against Whitmer and donors over the excessive contributions and are awaiting a final determination from Secretary of State Jocelyn Benson. After yesterday’s filing deadline, the amount of excess contributions Whitmer’s campaign has taken is about $4 million.
The poll was conducted by Marketing Resource Group. MRG  polled 600 Michigan voters between October 18-24.  41.4% of the respondents were Democrats, 37.8% were Republicans and 14.6% were Independents.  The poll had a margin of error of 4.0%.