Governor Whitmer’s complete control and reckless policies destroyed the economy. Instead of prioritizing getting people back to work and giving our students the education they deserve, Whitmer is focused on the only thing that really matters to her: Politics.

In a fundraising email today, Whitmer criticized us, the Michigan Freedom Fund, for launching “sustained attacks” on her. 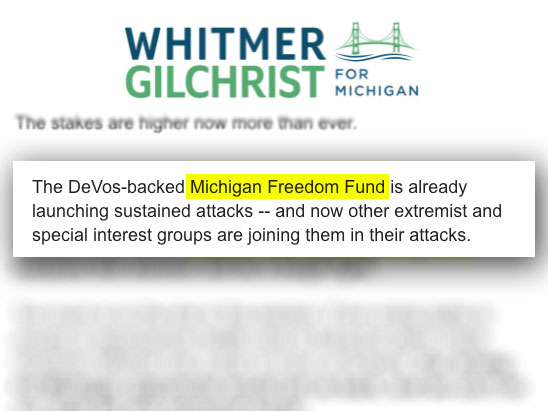 Whitmer can send as many fundraising emails about us as she wants, but we won’t be intimidated.

The reality is Whitmer knows we’re holding her accountable for her failed record that incentivized the destruction of our economy. Since she is so worried that we will continue to highlight her failures, I wanted to send you some of the top points Whitmer hopes people will forget.

Whitmer’s Failures On Jobs & The Economy

Whitmer’s Failing Our Students
Michigan is on the wrong track, but instead of working to rebuild Michigan’s economy and empower parents and students, Governor Whitmer is busy playing politics.
The power of government belongs to the people, not the other way around!
We won’t stop fighting. Chip in $10 to help us hold Governor Whitmer accountable.